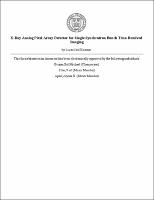 Dynamic x-ray studies may reach temporal resolutions limited by only the x-ray pulse duration if the detector is fast enough to segregate pulses. An analog integrating pixel array detector (PAD) with in-pixel storage and temporal resolution of around 100 ns, sufficient to isolate synchrotron x-ray pulses, is presented. PADs are a hybrid of a fully-depleted silicon detector for direct conversion of x-rays to charge that is electrically coupled at each pixel to a CMOS readout integrated circuit. This thesis work first motivates PAD development by an x-ray microdiffraction study of phase transformations in self-propagating reactions at rapid heating rates when the time for nucleation is limited and concentration gradients are large. Time resolution of 55 [mu]s and spatial resolution of 60 [mu]m was achieved using a PAD and high flux x-ray optics. The phase progressions measured differed from similar studies at slower heating rates and provide insight into nucleation and growth in thin film samples. Next, guidelines for a high-speed PAD at power dissipations amenable to large pixel arrays are presented. Using these guidelines, a 16X16 pixel CMOS readout was developed. The readout was hybridized to silicon detectors and combined with support electronics and flexible FPGA based control and acquisition to create an x-ray camera. The support electronics and FPGA code allowed for an exposure time down to 30 ns with 10 ns resolution, a 600 [mu]s readout, and buffering for 8,100 frames before a transfer to hard-disk was required. The camera was shown to resolve individual bunch trains from the Cornell University synchrotron at levels of up to 3.7 X 103 x-rays/pixel/train. Single shot intensity measurements were made with a repeatability of 0.4%-almost entirely limited by Poisson statistics. The camera remained functional after an accumulated dose of 600 kGy(Si) at the CMOS readout. Lock-in like functionality incorporated into the pixel electronics facilitated extraction of the frequency spectrum of input illumination at frequencies faster than the detector readout time. The developed camera is appropriate for experiments that explore single crystal dynamics at the Advanced Photon Source.