Wind, Water, And The Sands Of Mars 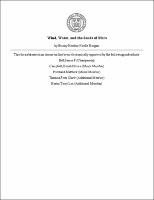 The north polar region of Mars is dominated by massive ice deposits and sand seas, and has been thought to be the product of the arid processes typical of the current martian geologic epoch, the Amazonian. However, new results from near-infrared spectroscopy and high-resolution images indicate that liquid water, in addition to ice, has played a major role in producing the unique compositions and morphologies of sediments in this region, and potentially elsewhere on Mars, during the Amazonian. This first major goal of this work is to investigate the composition of north polar deposits by developing new methods to map the distribution of hydrated minerals, weathering rinds, and ferrous minerals using near-infrared spectra from the Mars Express OMEGA imaging spectrometer. The distribution of these minerals and phases places constraints on both the transport and aqueous history of sediments in the north polar region. While previous detections of aqueous alteration products in this region were limited to the sand sea of Olympia Undae, results presented in Chapter 2 indicate that hydrated minerals are ubiquitous throughout the north polar sand sea and are present within the stratigraphic record of Planum Boreum, the north polar plateau. Furthermore, Chapter 4 identifies a new class of aqueous alteration products on Mars, leached iron-bearing glass deposits, which are interpreted as having formed due to acidification of melt water from regional snowpacks or ice sheets. The leached deposits are the dominant composition in significant portions of the north polar sand sea, in the cavi unit of Planum Boreum, and in the extensive low albedo region of Acidalia Planitia, suggesting that large regions of Mars have been pervasively altered by the action of ice and water during the Amazonian. The second major goal of this work is to investigate the effects of ice and water on the morphology and activity of dunes in the north polar sand sea, by mapping the distribution of decameter-scale features on the dunes. Although the dunes in this region appear to be active based on their lack of dust, sharp crestlines, and the observations of recent grain flow described in Chapter 3, remote sensing data sets and morphologic features suggest that the presence of ice and sulfates within the dunes may have slowed the rate of migration below what we have been able to observe. Additionally, a strong correlation between surface cracks and gypsum abundance in Olympia Undae suggests that the dunes are chemically cemented by the sulfates, most likely by gypsum deposited near the surface of the dunes by capillary wicking of brines. As the dunes have most likely been active recently, these brines must also be active and stable under current climatic conditions. This work presents a collection of new and unique observations of the effects of water and ice on the composition and morphology of martian north polar sediments. These observations suggest that although the Amazonian has typically been thought of as an arid period dominated by physical weathering, the northern plains have been, and likely continue to be, a dynamic cryo-sedimentary system where both physical and chemical weathering processes have been recently active.