Biological And Subjective Responses To Minority Status And Social Exclusion In The Workplace: A Gendered Perspective 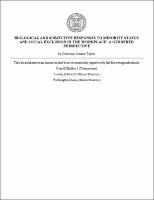 In this dissertation I use a mixed-method approach to advance sociological understanding of the relationship between social integration, minority status by sex and socially induced stress response. I conduct two studies to addresses gaps in the literature on workers who are in the minority by sex in their occupation or workplace. Several compelling case studies have found that women in the minority in the workplace on the dimension of sex (i.e., tokens) encounter negative workplace social environments. In contrast, some work has found that men in the minority in the workplace on the dimension of sex encounter positive workplace social environments. In Study 1 I use nationally representative survey data to demonstrate that the social experience of workers documented in these case studies is widespread and also occurs at the occupational level. In Study 2 I utilize two laboratory experiments to demonstrate the physiological effects of the social experiences of women in the minority by sex. I find that the social environment encountered by women in the minority in the workplace results in a biological stress response among both men and women in a laboratory setting. This finding provides evidence that the social environments encountered by these women can have negative repercussions in terms of stress response. It also provides evidence for the theoretical position that sex differences in behavior between men and women are caused by structural and interactional level phenomena - rather than by biological differences between the sexes. I also find that the relationship between biological stress response and perceptions of status in a group vary in gendered ways. Specifically, men evidence a relatively high biological stress response when they perceive that they are seen as low status by group members who are women. I speculate that the interaction between social structures and individual biological response might interact to re-create structures of inequality. I theorize that social arrangements influence biological outcomes, which in turn contribute to the reproduction of social inequality. In addition I note that the stress processes I document will likely have health implications for minority group members.