Under The Big Apple: A Retrospective Of Preservation Practice And The New York City Subway System 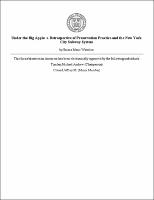 The New York City Subway system is one of the most iconic, most extensive, and most influential train networks in America. In operation for over 100 years, this engineering marvel dictated development patterns in upper Manhattan, Brooklyn, and the Bronx. The interior station designs of the different lines chronicle the changing architectural fashion of the aboveground world from the turn of the century through the 1940s. Many prominent architects have designed the stations over the years, including the earliest stations by Heins and LaFarge. However, the conversation about preservation surrounding the historic resource has only begun in earnest in the past twenty years. It is the system's very heritage that creates its preservation controversies. After World War II, the rapid transit system suffered from several decades of neglect and deferred maintenance as ridership fell and violent crime rose. At the height of the subway's degradation in 1979, the decision to celebrate the seventy-fifth anniversary of the opening of the subway with a local landmark designation was unusual. Narrowly scoped, the local designation protected just 12 stations out of hundreds, but introduced the Metropolitan Transit Authority (MTA) and the New York City Transit Authority (NYCTA) to the idea that preservation was an option rather than wholesale redesign of the stations during its modernization campaign, begun in the late 1960s. Twenty-five years later for the centennial of the subway, the local landmarks designation was followed up with a broader National Register nomination. Today 12 stations are locally designated while around 50 are individually listed on both the State and National Registers of Historic Places. In the years since the local designation, a preservation ethic has begun to be developed at NYCTA. The first real step towards incorporating preservation into regular station planning was introduced in the Station Planning & Design Guidelines in 1992. Additional programs for the sensitive treatment of historic stations have been included in capital projects and a resource database has been created for the NYCTA design staff so that projects that have preservation concerns can be immediately identified. The difficulty is balancing preservation issues with the dynamic quality of a mass transit system which has high safety, security, and consumer demands placed on it. A small preservation staff at NYCTA is attempting to find solutions to these problems and make sure that the legal requirements of the preservation designations are fulfilled. This thesis offers a retrospective and analysis of preservation practice in the New York City subway system. Through a series of case studies, the application of NYCTA's developing preservation ethic is examined by highlighting different aspects of preservation in the system. The case studies also locate areas of improvement for the stewardship of the stations. The goal of this research is to provide a history and critique of preservation practice within the New York City subway system.