False Memory, Emotion And Self 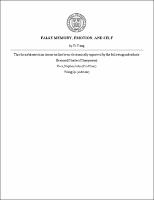 Do emotional valence and arousal increase semantic false recognition, orthographical false recognition, and suggestibility? Does emotion of memory targets have different effects than emotion of retrieval contexts? How, at a process level, does emotion influence these false memories? I investigated those questions in college students using associative recognition tasks, in which emotional valence and arousal can be manipulated factorially over cue and target sides. The importance of distinguishing between emotional context and emotional content was confirmed because emotion effects varied from side to side. The importance of factorial manipulation of valence and arousal was also confirmed because they had distinct and interactive effects on true and false memories, and more fundamentally, on gist and verbatim processes. I also investigated was positive bias in autobiographical memory. I studied the behavior of reconstructing over positive details of past performance as a function of gist interference and self goal regulation. Participants exhibited a general tendency to reconstruct in favor of themselves. This positive bias was especially strong when the performance was positively evaluated or when the performance was believed to facilitate goal achievement. Interestingly, gist and self goal were operative in different situations: Performance with low self-relevance was predominantly sensitive to gist manipulation, whereas performance with high self-relevance was exclusively responsive to self goal manipulation, resulting in either increased or decreased positive bias for the purpose of reducing the discrepancy between the goal and the current self.