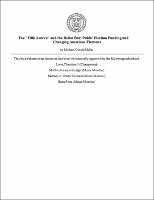 In this dissertation, I argue that full funding programs such as those functioning in the legislative elections of Arizona, Connecticut, and Maine alter the behavior of candidates and voters alike. I employ original survey and interview data from candidates in eighteen states, finding strong evidence of different campaign strategies when public money is present in a political system. While the effects of some of these changes are generally positive, the ramifications of others are not clear. Regardless, I show that in evaluating the true effect of public funding, its bearing on political behavior must be considered. Using genetic matching methods, I demonstrate that the acceptance of full public election subsidies provides candidates with time flexibility facilitating higher levels of direct interaction with citizens. I then exploit a natural experiment to demonstrate that Maine and Connecticut voters are more likely to cast ballots for state legislative contests when candidates accept full funding. Specifically, the results of two difference-in-differences models show that the presence of a publicly funded candidate diminishes ballot roll-off by between 1.5 and 2 percentage points. I then argue that ideology is a crucial determinant of participation in full funding systems, which I support with a utility model showing that very conservative candidates face high personal costs that make a privately funded campaign a more attractive option. The model predicts that Republican incumbents should therefore be more likely to face a publicly funded challenger. I confirm this prediction with logistic regression models from data in Arizona, Connecticut, and Maine. Since I confirm with genetic matching that fully funded candidates perform better on Election Day, I argue that the practical effect of public funding may be uneven in terms of partisan affiliation. Finally, I evaluate the effects of public funding on the behavior of candidates who choose not to participate. I analyze the transcripts of 16 in-person interviews with sixteen Arizona legislative candidates. I find that the state's matching funds provisions lead to pervasive gaming. Specifically, traditional candidates delay fundraising and spending until the final days of an election, which denies their publicly-funded opponents an opportunity to spend matching funds.