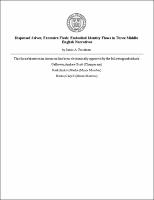 My dissertation examines the embodied nature of identity circulations in three late fourteenth-century Middle English narratives that operate within and across the generic boundary of romance: The King of Tars, The Siege of Jerusalem, and The Knight's Tale. These narratives take an interest in the construction of individual identities - chivalric, racial, religious, and erotic identities, in particular - as one of their defining characteristics, while deploying the body as the central terrain of that identitarian imaginary. Critics such as Susan Crane, Carolyn Bynum, H. Marshall Leicester, and Lee Patterson have characterized medieval narrative subjectivity as constructed, relational, and malleable. Yet even in this context of construct and change, these studies have tended to figure identity as essentially whole and, if malleable, have focused their attention on the end point of that identity mobility - at the knight's self-revelation, conversion, or avowal of a new communal affiliation - as the narrative affirmation of a finally coherent self. However, this insistence on sedimented identity becomes problematic when reading the fabulous narrative of the late fourteenth century, in which identities seem to come together and fall apart, move through series of beings, and commingle provocatively with racial/religious, class, and erotic Others. England's fourteenth century is marked by its increasing socio-political volatility, during which anxieties about all manner of circulations and instabilities permeate the ideological landscape: viruses, vernacular literacy, heresies, laborers, monarchy, and eventually the monarch himself are all in sometimes violent circulation in this period. This age of conflict, crisis, and mobility provides a fertile historical context in which to examine the potentialities of identification: both the ways in which selves disaggregate or shift as well as the various narrative responses to that movement. Ultimately, this study suggests that traditional models of narrative identity do not adequately represent the potential fluidity of identification one finds in the literature of the period. I maintain that tracing the movements of excessive or eccentric bodies opens important, and critically overlooked, avenues for reading embodied selves in late medieval narrative, readings that allow possibilities for identities that are expansive, mobile, and richly complex.