Solvent Manipulation, Dielectric Spectroscopy, And Rheological Analysis In The Electrospinning Of A Rigid Rod Polymer 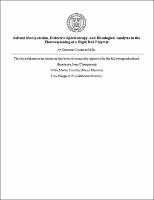 The main contribution of this research work is the demonstration that a highly rigid polymer can be electrospun into nanofibers using judicious combining of a good and a bad solvent. This research project is also a comprehensive examination of the dielectric and rheological properties of binary solvent poly(etherimide) (PEI) solutions and the influence of these properties in the formation of nanofibers via the electrospinning process. PEI is a high heat resistant polymer with rigid-rod chain orientation. Electrospun nanofiber mats of PEI have potential to be used in a myriad of applications including high efficiency air filtration in high temperature environments, such as industrial smokestacks as well as fire resistant layering. Through carefully structured combinations of polymer, good solvent and bad solvent a full range of electrospun morphologies were created, evolving from beads to uniform fibers, which were mapped to the polymer and solvent concentrations. Previous work has shown that rigid-rod PEI nanofibers could be electrospun by blending PEI with more flexible polymers, such as poly(etheretherketone) (PEEK). It is proposed that a positive alternative to polymer blending would be the replacement of a percentage of the good solvent with a miscible bad solvent. The advantage of the proposed approach is that the resulting fibers are composed of 100% PEI hence avoiding the compromise on the PEI's thermal and mechanical properties induced by a polymer blend with a flexible polymer. This projected used dimethylacetamide (DMAc) as the good solvent and tetrahydrofuran (THF) as the bad solvent. Dynamic rheological measurements were used to evaluate how the addition of a bad solvent to polymer-good solvent solutions modified the resulting electrospun nanofibers. Also, the bad solvent was used to dissolve polymer into the good solvent at percentages higher than the good solvent super saturation point. It was demonstrated that although THF lowers the viscosity of PEI/DMAc solutions, the addition of THF produces better PEI electrospun nanofibers. Because of THF's effect on the PEI chain volume and dissolution, and its high evaporation rate, the addition of THF and other "bad" solvents may add a new degree of freedom to the formation of nanofibers from rig-rod polymers via electrospinning.