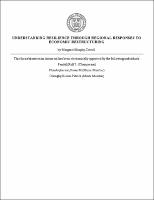 Borrowing from the resilience literature and utilizing a typology developed by Markusen and Carlson in 1988, this study will begin to match distinctive responses to deindustrialization with specific economic development strategies in order to better understand how certain Rust Belt regions fa red in light of their given responses and the various strategies they employed. In their article, -Bowing Out, Bidding Down, and Betting on the Basics: Midwestern Responses to Deindustrialization in the 1980s[DOUBLE VERTICLE LINE], Markusen and Carlson (1988) describe three types of responses to economic restructuring. The -Bowing Out[DOUBLE VERTICLE LINE] approach abandoned the idea of manufacturing reliance, focusing economic development efforts instead on the attraction and growth of service sector employment opportunities. The -Bidding Down[DOUBLE VERTICLE LINE] approach focused on curtailing manufacturing losses by decreasing the cost of doing business in a given region. -Betting on the Basics[DOUBLE VERTICLE LINE] describes economic development strategies that targeted existing heavy industry, emphasizing the retention and expansion of firms already in the area. Also included in this study is a fourth type of strategy that I call -Sharing the Wealth[DOUBLE VERTICLE LINE], which was proposed by Clavel and Kleniewski (1990) and describes strategies that embraced growth in the service sector and worked to inc orporate linkage policies for the redistribution of related benefits in that sector. In this study, regional responses in eight metropolitan areas of the United States Rust Belt region are analyzed through the lens of adaptive resilience. The regional responses are subsequently categorized based upon current economic and demographic data, data collected through extensive interviews with former stakeholders, and archival research utilizing planning documents. In order to gain a diverse and robust understan ding of each region's response, interviews were conducted with leaders from the public, private and non -profit sectors, and leaders representing offices with urban, suburban or regional interests. In the end, my research finds that those regions that ‗Bet on the Basics' were less likely to exhibit adaptive resilience than those that chose to ‗Bow Out.' The research also indicates that timing matters; m any of the regions that responded swiftly did exhibit adaptive resilience, while those who took more time to respond generally did not.