Cytoplasmic Polyadenylation Of Maternal Transcripts By Wispy In Drosophila Melanogaster 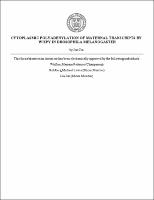 Gametogenesis and early embryogenesis in many animal species often occur in the context of little or no new transcription. Instead, they rely on the translation of preexisting mRNAs that had been synthesized and stockpiled earlier in gametogenesis. Translation of these mRNAs must be repressed during their synthesis and deposition, and then be activated later. One mechanism to regulate the translation of maternal mRNAs is to control the length of their 3' poly(A) tails through cytoplasmic polyadenylation. Studies in C. elegans identified a cytoplasmic poly(A) polymerase (PAP) GLD-2 that, in complex with an RNA-binding protein GLD-3, extends poly(A) tails of stored maternal mRNAs during oogenesis. Here, I identified the two GLD-2 cytoplasmic PAPs in Drosophila melanogaster. Using yeast two-hybrid assays I showed that both can interact with the Drosophila GLD-3 (Bic-C). I showed that one Drosophila GLD-2 PAP is expressed in the female germline, and the other in testes. I focused my subsequent research on the female-expressed GLD-2 PAP, which is encoded by the wispy gene. I showed that WISP activity is essential for polyadenylation of mRNAs during two key transitions: oocyte maturation and egg activation. wisp null mutations block development during the egg-to-embryo transition. Female meiosis resumes and completes in a proportion of the activated fertilized eggs laid by wisp mutant females, but pronuclear migration does not occur. Using a PCR-based poly(A) tail (PAT) assay to test the polyadenylation of candidate mRNAs, I found that wisp activity is required to extend the poly(A) tails of several maternal mRNAs in maturing oocytes or in early embryos. WISP-dependent transcripts during oocyte maturation include the dmos mRNA. WISP-dependent transcripts during egg activation include the bicoid, Toll, and torso mRNAs. To identify other maternal mRNAs that are regulated by WISP-mediated cytoplasmic polyadenylation, I used microarray analyses to globally identify mRNAs whose poly(A) tail lengths depend on active WISP. I found that thousands of maternal mRNAs are not polyadenylated in the absence of WISP function. My results indicate that WISP-mediated cytoplasmic polyadenylation is a major mechanism to regulate maternal mRNAs in oocyte development and early embryogenesis in Drosophila.