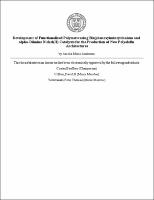 Decades of research in the area of metal-catalyzed olefin polymerization, since the initial discoveries by Ziegler and Natta in the 1950s, has lead to the development of a wide variety of transition metal catalysts as well as numerous polymer architectures. Although early work in the field focused on heterogeneous catalysis, Kaminsky's discovery of the scavenger/activator methylaluminoxane in 1980 facilitated a renaissance in the area of homogeneous catalysts. Today, many commercial polyolefin materials are still limited to linear homopolymers, random copolymers, or blends thereof. Therefore, our efforts have focused on the endfunctionalization and random incorporation of polar functional groups into polyolefins to produce polymers with improved properties and more complex architectures than traditional linear polymers. Initial work in this area focused on the development of well-defined long-chain branched polymers from end-functionalized polypropylene. Although many star polymers have been produced using anionic, cationic and radical methods, semicrystalline polypropylene materials with similar structures from coordinationinsertion polymerization were not known. Using a non-living bis(phenoxyimine)titanium catalyst, allyl-terminated syndiotactic polypropylene was produced and utilized in the production of alcohol-, azide- and amine-terminated polymers. These end-functionalized macromolecules were employed in the synthesis of a variety of well-defined branched polymers including star, miktoarm star and H- polymers. In an effort to produce branched polyolefin materials with high molecular weight, a norbornene-terminated polymer was synthesized from the allyl-terminated syndiotactic polypropylene. Using ring-opening metathesis polymerization, a number of high molecular weight polypropylene comb polymers were produced. All of the branched, syndiotactic polypropylene materials were analyzed further in an effort to related branching with observed polymer properties. To produce polyolefins with improved properties, a series of random copolymers derived from propylene and a polar, hydrogen bonding monomer were produced using Ni(II) [alpha]-diiminecatalysts. By varying the reaction temperature, hydrogen bonding polypropylene materials with a range of microstructures were produced. At high reaction temperatures, regioirregular, amorphous polypropylene was obtained, whereas, decreasing reaction temperature lead to highly regioregular, isotactic polypropylene. Utilizing the living nature of the Ni(II) [alpha]-diiminecatalysts, a series of triblock copolymers containing hydrogen bonding moieties in the midblock were also produced. The mechanical properties of all materials were investigated and generally observed to improve upon incorporation of small amounts (~1%) of the ureidopyrimidinone. For the branched and hydrogen bonding polymer reported herein, functionalization of polypropylene allowed for the synthesis of new polyolefin architectures.