A biography of and interview with Robert E. Lynk 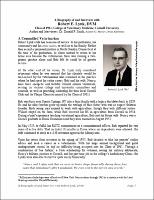 Robert E. Lynk was born into a farming family in Schoharie County. Anticipating a life in agriculture, he received his B.S. from Cornell University in 1954. After his marriage to an alumna of Cornell and a 16-month tour of duty in Korea, Bob joined the veterinary Class of 1961, the first cohort of students to matriculate in the new veterinary complex at the eastern end of the Cornell campus. Following graduation, he joined the general practice of Dr. Thomas Vaughn, first in Clarksville, and later in Delmar, New York. Dr. Lynk remained in this practice throughout his professional career, retiring in 1997 to an active life of painting, bowling, and Church activities. Throughout his career, Dr. Lynk has held several offices within the veterinary society at both regional and state levels. He and his wife, Nancy, are quintessential Cornell supporters, active in alumni and other events.