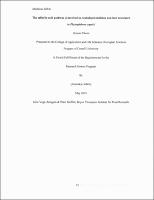 Different defense pathways are activated in response to different pathogens. Resistance to pathogens that maintain a long-term feeding relationship with their hosts, i.e., biotrophs, is mediated by the salicylic acid (SA) pathway. However, resistance to pathogens that kill their host and feed on the dead cells, i.e., necrotrophs, is mediated by the jasmonic acid (JA) pathway. RNA interference (RNAi) is also involved in plant-pathogen interaction. And in some cases, pre-invasion responses mediated by the PEN family of genes restrict pathogens from penetrating the plant’s cell wall. The goal of our study was to determine the defense pathway involved in Arabidopsis thaliana non-host resistance to the hemibiotrophic (which has the potential to be biotrophic and necrotrophic) fungus-like pathogen, Phytophthora capsici. We tested the susceptibility of detached leaves and intact plants from a variety of Arabidopsis mutant and transgenic lines affected in the SA, JA and RNAi pathways, and in cell wall penetration. Our results showed that resistance to P. capsici is primarily mediated by the SA pathway. NahG transgenic plants, which degrade SA into catechol, were most susceptible to P. capsici in detached-leaf assays. Also, using Arabidopsis leaves from transgenic lines expressing pathogen responsive promoters fused to a GUS reporter, we demonstrated that SA-responsive PR-1 and PR-2 genes, rather than the JA-responsive PDF1.2 gene, were induced after the leaves were inoculated with P. capsici. Mutations in genes involved in RNAi, such as argonaute (AGO) and silencing defective (SDE) loci, did not hinder Arabidopsis’s defense against the pathogen. Taken together, these results suggest that SA accumulation and the activation of the SA pathway are necessary for basal defense against P. capsici.