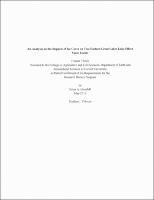 Analysis of lake effect snow events is important due to the economic effects lake effect events can have on a region, such as the replenishment of watersheds used in agricultural purposes. It is generally accepted that a number of factors play a role in the persistence and intensity of lake effect snow events, such as ice formation of the surface of the lake, but only recently has that relationship begun to be thoroughly examined. This observational study focuses on the impact of lake surface ice coverage on two lake effect storms that occurred downwind of both Lake Erie and Lake Ontario: “Jack Russell”, which occurred from February 19-20 2008, and “Jararaca”, which occurred from January 16-17, 2009. This study undertakes a graphical analysis of the lake surface conditions at the time as well as a mathematical study of the heat fluxes and total energy transfer interaction between the lakes and the atmosphere during the duration of the two lake effect events. The analysis identifies that Lake Erie, which is mostly ice covered, experiences a significant decrease in energy transfer as the event persists, while the relatively ice-free Lake Ontario experiences no significant change in energy transfer for the duration of the two storms. Graphical analysis indicates that the areas of heaviest and most persistent snowfall were experiencing wind fetches off the lake that had traveled over lake surface areas with minimal ice coverage and thickness, highlighting the influence of ice coverage and thickness on the development of lake effect bands.