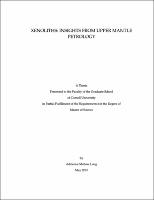 The word xenolith is Latin for strange (xeno) rock (lith). Mantle xenoliths are egg-shaped rocks comprised of olivine (ol) and orthopyroxene (opx) ± clinopyroxene (cpx), spinel (sp) and garnet (gt), and other trace minerals. Xenoliths are most frequently exhumed by explosive volcanoes. Worldwide, xenoliths show variations in petrology (e.g. Mercier and Nicholas, 1974, Kopylova et al., 2004), trace elements (Shaw et al., 2004) and P-T conditions (e.g. Macgregor, 1974, Nickel and Green, 1985, Finnerty and Boyd, 1987, Brey and Kohler, 1990). Interpretation of the variations in xenoliths worldwide greatly enhances our understanding of mantle processes. Xenoliths from two different sites are considered in this thesis. The site considered in Chapter One, Jericho Pipe in Northern Canada, is the diatreme of a diamondiferous kimberlite pipe containing mantle xenoliths from depths between ~45-220 km (Kopylova et al., 2004). Chapter Two is a study of xenoliths from Meerfelder Maar in the West Eifel Volcanic Field, Germany. Meerfelder Maar is the remnant of a phreatic eruption triggered by the encounter of hot magma with the water table that exhumed mantle xenoliths from ~70-80 km depth (Schmincke, 1983, Witt-Eichsceh, 2007). Chapter One describes our Matlab model of the paleo-geotherm below the North American Craton. We analyzed P-T data obtained using three geothermometers (Macgregor, 1974, Wells, 1977, Brey and Kohler, 1990) and three geobarometers (Nickel and Green, 1985, Finnerty and Boyd, 1987, Brey and Kohler, 1990) on xenoliths from Jericho Pipe in the Slave Craton area of Canada to generate possible geotherms for the Jericho Pipe region. Our geophysical model compares published heat flux data and surface heat production values with geothermobarometry conducted on Jericho xenoliths. Geothermometers and geobarometers respectively are compared and analyzed for accuracy and precision relative to the petrology of the Jericho region. Each geotherm shows a scatter in the data and change of slope of the best-fit line to the data between depths ~160 km and ~220 km (see Figures 1.7, 1.8, 1.11, 1.12, 1.15, 1.16). We hypothesize that this change of slope is resultant of mantle plume impingement at the basal Canadian Shield prior to the eruption of Jericho Pipe and other regional kimberlites. We use a Matlab-generated 1D thermal model based on code developed by Depine et al., (2008) to explore this hypothesis. Implied in this hypothesis and seen in the model (see Figures 1.7, 1.8, 1.11, 1.12, 1.15, 1.16) is that continental cratons do not cause underlying mantle to appreciably warm on a ~200 Ma timescale by acting as effective insulators for mantle material. Furthermore, the basal heating event must be geologically short-lived, spanning ~50 Myr (see Figures 1.7, 1.8, 1.11, 1.12, 1.15, 1.16). Chapter Two is an empirical FTIR study of water content in Meerfelder Maar xenoliths. The amount of water present in the mantle affects melt geochemistry (e.g. Shaw et al., 2005, Bolfan-Casanova, 2007) and subsequently mantle viscosity (Grant et al., 2007). Chapter Two considers water partitioning in the mantle below the Eifel region of Germany by looking at maps of water concentration within minerals and along grain boundaries as well as single spectra graphs of H2 O and OH- at specific points within minerals. Meerfelder Maar xenoliths contain a high amount of molecular water in olivine and clinopyroxene and below average amount of molecular water in orthopyroxene (see Table 2.2) with respect to other xenoliths worldwide (Grant et al., 2007).