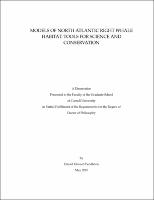 Intense whaling nearly abolished the North Atlantic right whale (Eubalaena glacialis) population. Present day threats to the species are collisions with vessels, entanglement in ﬁshing gear, and environmental variability. In this body of work we quantify the relationship between right whales and their prey, ricegrain sized crustaceans called copepods, and employ a spatial model to predict the potential distribution of right whales on a weekly basis. Time series datasets of right whale abundance and copepod concentration were analyzed to quantify the relationship between right whales and their prey. We found signiﬁcant relationships between right whales and copepods in Cape Cod Bay and the Great South Channel. These results tell us that accurate regional-scale models of copepod concentration can be used to infer the time and location of good right whale feeding conditions. The environmental niche of right whales was characterized using modeled prey abundance, sea surface temperature, chlorophyll concentration and bathymetry. With environmental data for the time and location of each right whale occurrence between 2002 and 2006, we trained and tested a model to predict right whale habitat suitability on a weekly basis. The accuracy of predictions was good, and the feasibility of our approach was veriﬁed. Results suggest that right whale habitat preferences are dynamic and that the distribution of prey is an important to the distribution of whales. We built an operational forecasting model of right whale habitat suitability in Cape Cod Bay, and used it to make weekly predictions for the year 2009. Modeled concentration of two right whale prey taxa (C. ﬁnmarchicus and Pseudocalanus spp.) sea surface temperature, chlorophyll and bathymetry were used as predictor variables. Predictions were veriﬁed with occurrences of right whales in Cape Cod Bay from 2009. Model output was used to assess the utility of moving shipping routes in Cape Cod Bay. The model was then projected, beyond the model-training region, into Massachusetts Bay. Results suggested that altering of shipping lanes in Cape Cod Bay is unlikely to reduce the risk of ship-strikes. A signiﬁcant positive relationship was found between predicted habitat suitability and the number of acoustic detections of right whales in Massachusetts Bay. We conclude that our modeling approach could be used to: 1) issue weekly forecasts of right whale habitat quality, 2) assess conservation actions, 3) guide survey effort in other regions, and ultimately to reduce human-caused risk to the right whales.