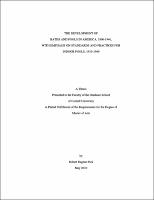 This study reviewed the historical development of the modern American swimming pool, tracing its roots back to the Greco-Roman Era, advancing through the European Middle Ages and into the young American republic. Early American aquatic structures used primarily for bathing and often leveraging natural water sources, evolved into recreational and sporting facilities which took advantage of developments in both building methods and technology, as well as improvements in water disinfection and filtration. By 1940, the American swimming pool was not only ubiquitous, but utilized designs, methods and materials which remain familiar today. The survey begins by tracing the early origins of pools as baths in several ancient cultures through to the Enlightenment. Next, it traces the evolution of the of the public health and hygiene movement in the United States and Britain, a movement which resulted in the first widespread construction of public baths and pools in the United States. The review then shows the transition from baths as a hygienic aide to pools for sport and recreational purposes. This transition from baths to pools brought substantial standardization in design with it, though there continued to be a variety of standard in play for several decades as different governing bodies of aquatic sports were founded and refined their requirements. Finally, construction and equipment standards of the day are reviewed. The final analysis shows that indoor pools in the United States during the early part of the 20th century, while tracing their origins back several millennia, came to represent the result of political and health movements, as well as a succession of design and construction standards. In many ways, pools from this era are a microcosm of both building technology and social movements, each of which underscore the value in their preservation. Pools - their design, construction, standards and use - represent many of the technical and social challenges and opportunities of the early 20th century.