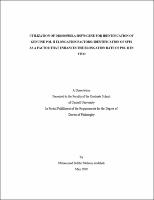 Transcription by RNA polymerase II is a multistep process that requires orchestrated function of multiple transcription factors. Several eukaryotic transcription factors have been shown to modulate the elongation rate of RNA polymerase II (Pol II) on naked or chromatin-reconstituted templates in vitro. However, none of the tested factors have been shown to directly affect the elongation rate of Pol II in vivo. In the work presented here, I will show that complementary molecular and imaging techniques, in combination with utilization of the Drosophila Hsp70 gene, provides an attractive and suitable model for identification of bona fide transcription elongation factors in vivo. Through ChIP assays of the first wave of Pol II after heat shock in S2 cells I show that KD of Spt6 reduces the rate of Pol II elongation. Also, fluorescence recovery after photobleaching assays of GFP-Pol II in salivary gland cells show that this Spt6-dependent effect on elongation rate persists during steady-state-induced transcription, reducing the elongation rate from approximately 1100 to 500 bp/min. This drop in the rate of transcription elongation results in accumulation of less Hsp70 mRNA after heat shock induction. I also demonstrate that Spt6 plays a critical role in recruitment of the Paf1 complex and Spt5 to the heat shock loci. RNAi knock-down of Spt6 also decreases the global levels of Ser2-P CTD. Furthermore, RNAi depletion of Spt6 reveals its broad requirement during different stages of development. In summary, this work shows that in combination with complementary molecular and imaging techniques, the Drosophila Hsp70 gene provides an attractive model system for analyzing the role of suspected transcription factors in transcription elongation. In a separate project, I also report that a previously uncharacterized SET domain-containing Drosophila nuclear protein, CG40351 (dSet1), and not the other putative histone H3K4 methyltransferases, is predominantly responsible for trimethylation of bulk histone H3K4 and histones at the 5'-end of tested transcriptionally-active genes. Polytene staining and live cell imaging results also show widespread association of dSet1 with transcriptionally-active loci, including activated Hsp70 gene. I also show that dSet1 is required for maximal accumulation of Hsp70 and Hsp26 mRNA during the steady state of transcription activation. ii