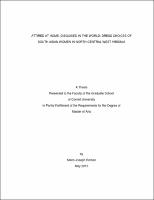 This study seeks to locate the identity negotiations of a group of South Asian women living in the United States within the daily choices of their dress. The population consists of ten women, eight Indian and two Pakistani, ages 43 – 65, who live in the North-Central region of West Virginia. These subjects are part of the post-1965 wave of South Asians immigrants to the United States; all of whom came between 1974 and 1992. The wave of South Asians who migrated to the U.S. after the Johnson Administration relaxed the immigration and naturalization policies has received scholarly scrutiny from the social sciences as to how this "model minority" has assimilated into the fabric of America. The extensive body of literature on the South Asian diaspora focuses on the individual and communal negotiations of the immigrants' identities. The research questions which frame this study are: How have these Indian and Pakistani women of this post-1965 generation of immigrants adapted their dress to America and West Virginia? Who are these women when they make dress choices? This research was inspired by fictional immigrant characters of diasporic literature who aspire to "fit in" to new settings where the climate and culture are new but who are mostly suck in traditional behavior and dress. Semi-structured interviews were conducted in individual and group settings to uncover how these women's relationships to their clothing inform their adaptive relationship with American culture and their own self-identification. The concepts of spatial-dress divisions, emplacement, cross-dressing performance and appearance management were used to analyze the interviews in three collective case studies. Spatial-dress divisions reach as far back as the Vijayanagara Empire in the subcontinent and these public/private divisions of dress carry through to modern day South Asia. The spatial-dress choices of the ten participants were examined in the diasporic context to uncover how they have altered to include a tertiary space defined in this study as the "semi-private" space. This third space is a community specific space where a collective South Asian identity is performed through nostalgic modesty and dress. Sensory culture theory includes a wide variety of concepts to interpret people and spaces from a sensed perspective. From this body of theory, emplacement was chosen to understand the subjects' dress choices beyond an embodied perspective and in a mind-bodyenvironment perspective. The subjects of this study maintain Western and South Asian wardrobes and fluidly move between them based on environmental and occasional contexts. Marjorie Garber's work on crossdressing performance and Susan Kaiser's social-psychological work on appearance management are brought together in the third case study to explore how identity is negotiated by divisions and combinations of South Asian and Western. The one constant which exists with all the subjects is their sense of modesty learned from their upbringings in India and Pakistan. The result is a cross-dressed experience where Western dress and South Asian modesty blend into a diasporic language of dressing. This research concluded that the participants in this study renegotiated their dress choices through the processes of cross-dressing and appearance management in order to redefine traditional spatial-dress divisions in the American context.