The Work Of Difference: Form And Formation In Twentiethcentury Literature And Theory 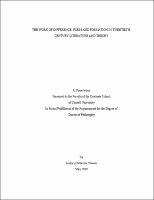 My dissertation argues for a non-romantic conception of the literary work, one that can account for a certain integrity of the work without reducing it to a form of identity based on closure, completion, or self-reflection. It begins by taking issue with a persistently romantic problematic in contemporary criticism and theory. Deriving from the work of Immanuel Kant, this problematic leads critics to pose the question of a work’s organization in terms of two alternatives: on the one hand, a totalizing form or system, and on the other a disruptive break or freedom. Neither alternative is deemed adequate to a notion of literature; rather, literature becomes the privileged locus and paradoxical presentation of the tension between them. I proceed with an analysis of the fragment in early German romanticism as instantiating a new model of the literary work, one in which the conflict between freedom and system is preserved in an opposition between literary form and the activity of reflection. I discuss the self-perpetuating mechanism of this conflict as it pervades major critical statements of the twentieth-century, focusing on the works of Cleanth Brooks, Maurice Blanchot, and Gilles Deleuze. The second half of the dissertation analyzes a series of twentieth-century literary texts in order to argue that something else is being thought by these texts than what can be apprehended either by the terms of a renewed romanticism, or by literary histories that understand modernism as a reaction to romanticism. Each of these texts presents a distinct challenge to a different aspect of the romantic paradigm. Beckett’s trilogy complicates the self-reflection at the heart of the romantic model of art; and in the disjunction it introduces between its figures and its actual functioning, it produces an image of the necessity of writing as a wholly external and unassailable demand. Proust’s novel likewise traces a disjunction between the self, its sense impressions, and their conversion into a work of art, representing its own hyperbolic organization in the form of its protagonist’s vocation to write. Stein’s work, finally, replaces romantic forms of organic development with an open, generative repetition.