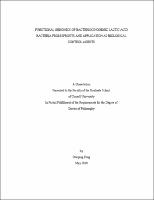 Fresh sprouts have been responsible for 30 foodborne illness outbreaks and 1800 cases since 1996 in the United States. Use of chemical sanitizers prior to the sprouting process has been attempted in many studies to decontaminate or control the growth of pathogens. In 1999, FDA issued a guidance to reduce microbial food safety hazards for sprouted seeds. However, even after FDA's guidance, continuous outbreaks have still been a serious concern for consumers. In an attempt to control the growth of foodborne pathogens on sprouts using protective cultures, lactic acid bacteria (LAB) were isolated from fermented sprouts. Many of the LAB isolates were found to produce bacteriocins, which are ribosomally synthesized antimicrobial peptides that can inhibit closely related bacteria. One bacteriocin, designated mundticin L, produced by Enterococcus mundtii CUGF08 was found to inhibit Listeria spp. and other genera. Another bacteriocin, produced by Lactococcus lactis AA4 was found to be nisin Z. The genetic determinants for mundticin L, the associated ATP-binding cassette (ABC) transporter, and immunity protein were identified, cloned, and sequenced. Mundticin L was isolated and confirmed by N-terminal amino acid sequencing. The function of the immunity protein was analyzed by heterologous expression of the immunity gene in sensitive Gram-positive organisms. The immunity protein does not provide full protection. However, additional factors may be involved in this unusual phenotype. Genomic mutagenesis may reveal these factors. Thermal inactivation and biological control utilizing naturally occurring bacteriocinogenic LAB were investigated as potential decontamination strategies. Both methods showed potential in enhancing the safety of fresh sprouts. LAB as bioprotective cultures to enhance the safety of sprouts may serve a model as a "natural" or "green" hurdle for the safety of non-fermented produce.