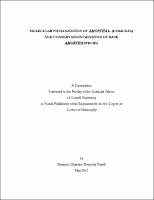 Amorpha L. (Fabaceae) is a distinctive North American genus of 16 species in which the corolla is reduced to a single petal. Continuous morphological variation and phenotypic plasticity have made delimiting species difficult, especially in the highly variable, tetraploid A. fruticosa complex. Most species have very limited distributions except A. fruticosa, whose broad range overlaps with those of all other species. A molecular phylogenetic study of Amorpha was undertaken to assess monophyly, ascertain species relationships, and explore polyploid origins. Results from chloroplast data indicated that Amorpha is monophyletic; however, nuclear gene analyses indicated that Amorpha is paraphyletic due to the placement of Errazurizia rotundata and Parryella filifolia. Other key relationships recovered included A. californica plus A. apiculata as the earliest diverging lineage in Amorpha and a close relationship between A. georgiana and A. nana. Amorpha fruticosa and A. herbacea were identified as putative progenitors of two tetraploid species: A. confusa and A. crenulata. The origin of A. fruticosa remains unclear, but continued gene flow from sympatric species through hybridization and introgression is a likely cause of its pattern of tremendous morphological variation. Genetic diversity, population structure, and recent population bottlenecks in A. georgiana, an endangered species, were explored to inform conservation management. Levels of genetic diversity were high and the single remaining Georgia population was well differentiated from populations of the Carolinas, which had weaker structure among them. Only a geographically disjunct population, where hybridization with A. herbacea was also detected, showed strong evidence of a recent population bottleneck, perhaps due to a recent founder event. The success of restoration genetics efforts for A. crenulata, a federally endangered Florida endemic, were evaluated by assessing genetic diversity and population structure in wild, ex situ, and restored populations. Genetic diversity was high in wild populations and was partitioned into three geographically correlated genetic clusters. High genetic diversity was captured in ex situ and restored populations, with the notable exception of one large restored population. Genetic replication of wild gene pools was successful for overall diversity and preservation of genetic clusters, but accuracy was low because many rare alleles were absent