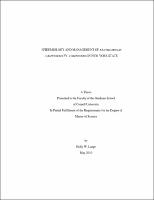 Black rot caused by the bacterium Xanthomonas campestris pv. campestris (Xcc) is a serious disease of crucifers which are a high value crop in New York. This pathogen can affect plants at any growth stage and cause widespread economic loss through reduction of yield and quality. The overall goal of this study was identifying the inoculum sources of Xcc in New York so that management strategies could be targeted to the appropriate location. To determine the diversity of strains of the pathogen more than 150 isolates of Xcc were collected over six years. Repetitive element polymerase chain reaction (rep-PCR) fingerprinting was the primary technique utilized to differentiate the isolates. The appearance of new fingerprint patterns in the state each year indicates that new infections do not primarily arise from the pathogen remaining in fields from one season to the next but are more likely introduced on seeds and/or transplants each year. Since the pathogen can overwinter in NY, rotation and control of debris are also important for eliminating inoculum sources. Weeds have been found to harbor Xcc in other locations, but little is known of their role as an inoculum source in NY. 2004 was a year with a severe black rot epidemic. The following spring, five fields were targeted to determine if Xcc was present in weeds where inoculum levels had been high the previous year. Of the 77 weeds collected from May through July 2005, bacterial isolates from 21 grew on Xcc semi-selective media and eight were determined to be Xcc using an enzyme-linked immunosorbent assay test (ELISA). When inoculated into cabbage in the greenhouse, none of the isolates from weeds caused typical V-shaped lesions. The rep-PCR fingerprint patterns of isolates collected from the weeds were not the same as those derived from cabbage isolates collected from fields or greenhouses the previous, or in following years. Bacterial isolates were also collected from cruciferous weeds in 2006 and 2007. Seven isolates out of 92 cruciferous weeds collected in these two growing seasons did cause V-shaped lesions in greenhouse inoculations. Four of these isolates were collected from a field showing black rot symptoms in the cabbage crop. With the exception of this field, the Xcc isolates from weeds had different rep-PCR fingerprint patterns compared to Xcc isolates from cabbage. This study provides evidence that while weeds can be infected with Xcc; the strains appear to be different than those responsible for field infections thus do not serve as a primary reservoir of Xcc inoculum. The black rot pathogen can be seed-borne and even rigorous seed testing can not guarantee that every seed is free of bacteria. In greenhouse transplant facilities, conditions are ideal for the spread of Xcc with dense plant populations and overhead watering. Asymptomatic transplants can initiate field infections which are very difficult to control. The efficacy of copper hydroxide and benzothiadiazole to control the spread of black rot in inoculated flats was investigated. Leaf washes were used for dilution plate counts and real-time PCR to quantify pathogen numbers on cabbage seedlings. Both products did provide a significant reduction in the Xcc population over untreated control flats. Additionally, it was determined that younger seedlings could harbor larger numbers of Xcc bacteria than older seedlings, and that the age of the seedlings had an effect on the efficacy of copper hydroxide. Targeting cabbage transplants at the optimum age (the two-true leaf stage) for application of chemical controls is an effective management tool to decrease the population of Xcc in an environment favoring disease spread.