Genetic Diversity And Evolution Of Disease Response Genes In Sorghum Bicolor L. Moench And Other Cereals 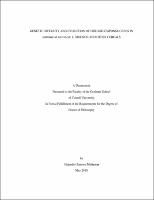 Several studies have shown that disease resistance genes diverge under recurrent positive selection as a result of a molecular arms-race between hosts and pathogens. However, these studies have been conducted mainly in animals and few plant genes have been shown to evolve adaptively. The study of plant molecular adaptation for disease resistance is fundamental to our understanding of plant-microbe interactions and to the development of novel plant breeding strategies. Here, we combined information from the expression pattern of Sorghum bicolor genes and their divergence to rice in order to identify candidate disease response genes (DRGs). We used evolutionary analyses of orthologous DRG sets from grass species to identify positively selected genes and the targeted residues. Six genes showed a pattern of substitution consistent with positive selection: a thaumatin, a peroxidase and a barley mlo homolog, all known antifungal proteins; and a MADS box gene, an eIF5 gene and a gene of unknown function: SESPY. All adaptive sites mapped to the surface of the crystal structures of peroxidase and thaumatin and several are close to the active sites. This information provides a basis for functional validation studies, the identification of accessions having variation at important residues and the rational design of DRGs. Rapid divergence through positive selection should correlate to reduced intraspecific polymorphism. Here we compare the macroevolution and intraspecific polymorphism of positively selected disease response genes and show that the patterns of polymorphism found are consistent with both selective sweeps and balancing selection. The sorghum mlo homolog and SESPY, have old, divergent alleles, while a peroxidase and a gene with a RNA binding domain have significantly reduced diversity suggesting a recent selective sweep. Finally, we show that sorghum DRGs are significantly closer to the telomere and have more exons than a control set of evenly expressed genes. The evidence from gene location; structure; macro-evolution and polymorphism of these DRGs point to the great selective pressure produced by pathogens which has driven the evolution of cereal genome content, order and function.