Water Privatization At The Tap And In The Bottle: Exploring The Challenge Of Anti-Privatization In A Market Society 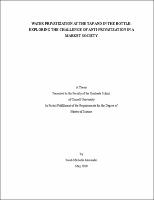 The early 1990s marked the beginning of a wave of unprecedented growth for private water utilities firms and the bottled water industry. A wealth of academic literature has emerged which discusses the privatization of municipal water systems, however, in this discussion of water privatization the prevalence of bottled water is not directly addressed. Connections between the governing ideas encouraging water privatization are overlooked, despite many scholars as well as citizens' groups demand autonomous control of their water systems, both through the creation of a water commons as well as the ousting of the private firms. In my thesis, I connect the rise of private water (both in the forms of municipal water and bottled water) to a dominant conception of market rationality. I engage Karl Polanyi's theories of the rise and resistance to this ideology of economic liberalism and identify the struggles over water as part of a double-movement. Increased municipal privatization is easily attributed to powerful governing forces, such as World Bank Structural Adjustment Programs, but through an examination of bottled water, I emphasize the lasting impacts of this ideology on the individual and the challenge this poses to the implementation of alternatives.