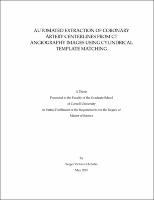 Recent developments in computed tomography angiography (CTA) imaging allow for the acquisition of contrast-enhanced volumetric images of the human heart region. High resolution CTA images are vital in obtaining precise information about the structure of the coronary arteries and help to make more accurate clinical diagnosis of coronary heart disease. This work is focused on an automated method for the reconstruction of individual coronary artery centerlines. An algorithm to automatically identify the centerlines of coronary arteries in a three-dimensional CTA image set based on local tubular matching was developed. The algorithm is seeded with manually speciﬁed starting points at the distal location of a coronary artery and then proceeds iteratively toward the junction with the aorta. The algorithm makes necessary corrections to account for motion artifacts and is able to perform on the images of moderately diseased arteries. Twelve cardiac CTA cases were used for algorithm validation. For each case, the four longest visually discernible branches of the major coronary arteries were evaluated. For 85% of these branches, the algorithm was able to extract the entire centerline automatically from a single manual initialization. In addition, the geometric accuracy of the reconstruction was evaluated by measuring the distance between automatically extracted and manually marked centerlines. For the five artery segments used in this study, the average distance between the centerlines did not exceed 0.70 mm with the maximum distance of 2.15 mm. These results indicate that the suggested method can be successfully used to approach the goal of automated coronary artery segmentation.