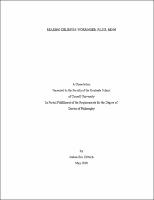 In this dissertation I approach "delirium" as an aesthetic and poetic discourse in early 20th century German literature. Through a series close readings of texts by Wilhelm Worringer (1881-1965), Rainer Maria Rilke (1875-1926) and Gottfried Benn (18861956), I argue that "delirium" emerges as a style of writing that strives to bring tactile immediacy to the poetic word. In this context, words are no longer merely symbols or signifiers, but rather poetic elements that act directly on the body of the writer and reader. As writers and readers pursue such words, they also pursue the loss of subjective and linguistic control that such words necessarily entail. It is this oscillation in language between conscious striving and the breakdown of consciousness that I describe as a delirious style. In the Introduction, I explain my method of reading (I call it a phenomenology of verbal sensation) by tracing the genealogy of delirium as an aesthetic concept through the work of Michel Foucault (on "Unreason" and "the thought from outside") and Gilles Deleuze (on "sensation" and the "clinical aesthetic"). I also situate delirium historically at the confluence of early 20th century discourses on vitalism, haptic vision and Expressionism, and point out the critical advantages of my methodological approach to the writers in question. In Chapter 1, I read two poems - Rilke's "Der Lesende" (1901) and Benn's "Staatsbibliothek" (1925)- as the two poles between which delirious style oscillates. Chapter 2 connects Wilhelm Worringer's art-historical work on expression and non-organic life to the aesthetic and discursive concept of delirium through a reading of Abstraktion und Einfuhlung (1908) and Formprobleme der Gotik (1911). In Chapter 3, I approach Rilke's Die Aufzeichnungen des Malte Laurids Brigge (1910) as a delirious text by contrasting it with his earlier reflections on the visual arts in Worpswede (1903) and Briefe an Cezanne (1907). In the fourth and final Chapter, I offer a close or "haptic" reading of Benn's 1915 prose text "Gehirne."