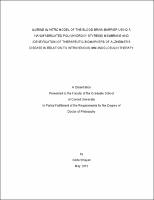 Currently, there are over 5.3 million people in the United States diagnosed with Alzheimer's disease, with the disease being the sixth leading cause of death in the country. Current drugs on the market for the treatment of Alzheimer's disease are lipophilic small molecules that cross the blood-brain barrier by passive diffusion and none have been clinically useful in reversing the symptoms of the disease. Immunotherapy with intravenous immunoglobulin (IVIg) is one of several treatment strategies now being studied as part of efforts to discover safe and more effective treatment paradigms for Alzheimer's disease. In 2005, Weill Cornell Medical College initiated the phase I clinical trial of IVIg for the treatment of Alzheimer's disease, and the clinical outcomes indicated improvements in the cognitive abilities of subjects beyond expectations. This dissertation will address combining proteomics and statistical approaches with novel designs for in vitro blood-brain barrier models with an attempt to understand the molecular basis for the disease-modifying effects of IVIg in Alzheimer's disease. The first part of the thesis focuses on the development of a new in vitro model of the blood-brain barrier based on a co-culture between primary mouse brain microvascular endothelial cells and primary rat astrocytes on commercially available polyester membranes and nanofabricated poly(hydroxyl styrene) membranes. This model serves as a successful platform technology for evaluating molecular transport across the blood-brain barrier. The permeability of central nervous system drugs across this in vitro model correlated well with in vivo data, with the correlation coefficient being 0.98. The second part of this thesis provides examples of proteomics approaches coupled with advanced statistical modeling that can be utilized to identify therapy induced biomarkers in the cerebrospinal fluid. Specifically, cerebrospinal fluid samples from Alzheimer's subjects who underwent IVIg immunotherapy were analyzed using gel-based proteomics and the results were analyzed using a statistical model to identify 25 therapeutically relevant biomarkers in response to IVIg. These proteins have been previously implicated in Alzheimer's disease and the changes in their concentration is consistent with previous reports regarding the expression of them in the brain of Alzheimer's subjects compared to normal individuals.