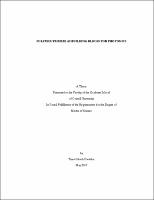 Self-assembled photonic materials provide an important low cost route to light control. Particularly, crystals that exhibit an omnidirectional photonic band gap for light waves have been sought for use in LED out-coupling applications, zero threshold semiconductor lasers, sensors with very low detection limits, and high efficiency solar cells. The general class of photonic crystal materials is constructed to have periodic dielectric constant and high dielectric contrast between building blocks and matrix regions. The width and stability of an optical band gap in photonic crystals strongly depends on the lattice and basis of the structures. Spherical colloidal particles have dominated the research on this topic in colloidal science. However, nonspherical motifs have been shown in theoretical reports to more effectively promote strong light-matter interactions leading to the desired control of dispersion properties. Work on the synthesis of monodisperse colloidal particles in a range of shapes, micron and submicron sizes, composition and surface characteristics has intensified in recent years. However, it still remains a challenge to produce ordered arrays over large areas with nonspherical particles. In the present work, monodisperse "bent" trimer polystyrene colloids 1-2µm in largest dimension were synthesized using multi-stage seeded emulsion polymerization. The seed crosslinking density, hydrophilic coating density and swelling ratio of monomer to polymer were varied to obtain uniform particles. The spontaneous organization of the trimer building blocks under confinement was examined using optical and confocal microscopy. Monolayer films with particle axes oriented in-plane, out-of-plane, or at acute angles with respect to the substrate were observed in the wedge cell confinement geometry as a function of cell height and particle morphology.