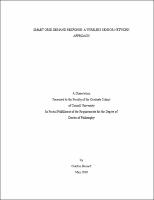 Wireless Sensor Networks are being used now, in more applications than ever imagined. Much like the Internet and other revolutionary telecommunications technologies that have been developed in the past two decades, wireless sensor networks are slowly starting to become a part of the general populations everyday life. So much so that they are now being integrated into everyday consumer electronics and appliances, to monitor our electricity consumption habits. The goal of course is to educate customers about wasteful spending habits, and hopefully encourage them to participate in programs that will not only reduce electricity bills, but also help preserve an already archaic electric power system. To this end, customer appliances and their electric power meters must be retrofitted with small easy to use wireless sensors to form a network capable of providing real time data to the customer about their electricity consumption. This thesis details how such a network can be created not only between appliances within a home and the customer's meter, but also how the meters themselves form a network that can be used to relay customer data to the utility. In particular we have shown how a novel current sensor design can be used to not only measure the power of appliances, but also scavenge enough energy to power the device indefinitely. The second part of this thesis examines the Zigbee protocol, which has become an industry standard for ad-hoc smart meter networks. We exploit the reactive nature of the protocol to create loop free redundant paths between each source node (smart meter) and the sink node (utility access point), to facilitate the use of the well-known Multiprotocol Label Switching architecture with the Zigbee protocol.