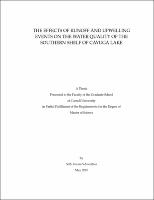 The water quality on the southern shelf of Cayuga Lake is of interest locally - it is used for recreation, water supply, and the disposal of treated wastewater, but also more broadly since the factors that control the water quality in this system are common to many lakes and coastal systems. The configuration of a shallow shelf that receives both natural flows and anthropogenic nutrient loads, while at the same time being connected to a larger body of water whose dynamics strongly affect the system is commonly found in many embayment and estuarine systems. The question of what mechanisms control the water quality of the system and how is complicated by the fact that the processes of interest are highly intermittent, both in frequency and in magnitude, and vary both randomly and on seasonal and interannual timescales. Using an 11 year (1998 - 2008) record of water quality data collected biweekly during the April - October months of each year at 9 sites in the lake, we examine the response of the water quality on the southern shelf of Cayuga Lake to various physical forcing conditions (e.g., surface runoff and internal seiche dynamics) and various loading and flow rates from natural and anthropogenic sources. Several cases of extreme forcing and system response are examined and metrics of correlation of water quality parameters with forcing conditions are calculated. We hypothesize that in the absence of strong forcing in the form of high flow rates in the tributaries to the shelf, water quality on the shelf and the spatial gradients in water quality on the shelf are controlled by the interaction of basin scale internal waves and the shelf slope. When the wind blows from the south for a duration greater than the lake's uninodal horizontal seiche period (T/4), the thermocline tilts up in the vicinity of the shelf. This leads to reduced exchange between the shelf and the main basin's epilimnion, resulting in higher nutrient levels near loading sources on the shelf. When the wind blows from the north the thermocline is tilted down near the shelf, exchange across the shelf break is increased, resulting in lower levels of nutrients on the shelf. Gradients in averaged metrics of water quality exist between different parts of the shelf. We suggest that these gradients can in part be explained by effects of the earth's rotation, which cause runup of internal waves on the shelf slope to generally be higher on the western part of the shelf than the eastern, leading to increased mixing with hyplimnetic water and reduced levels of metrics such as chlorophyll-a concentrations.