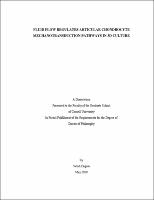 Mechanically compressing cartilage leads to fluid flow which regulates chondrocyte matrix metabolism. The mechanism through which this occurs is unclear, in part because of the coupled nature of physical stimuli associated with flow interactions with cartilage extracellular matrix as well as the lack of experimental techniques to directly quantify fluid flow through porous scaffolds used as tissue analogues. The objective of this research was to investigate the effects of physiologically relevant fluid flow on the metabolic response of chondrocytes cultured in threedimensional hydrogel scaffolds. The hypothesis of this research is that fluid flow regulates mechanotransduction of chondrocytes in 3-D alginate scaffolds through a calcium-mediated signaling pathway. In order to decouple the effects of the multiple stimuli associated with fluid flow the material properties of alginate hydrogels were characterized and used calculate the physical forces presented to cells via finite element models. The first aim developed a novel technique to visualize fluid flow in porous scaffolds in order to measure fluid velocity and generate flow profiles. The second aim examined the effects of fluid flow, particularly hydrostatic pressure and wall shear stress, on the calcium signaling response of chondrocytes seeded in alginate scaffolds. The third aim investigated the effects of cell-scaffold adhesion on chondrocyte calcium signaling response to fluid flow. These studies demonstrate that by directly measuring fluid flow through porous media and characterizing scaffold material properties, the physical stimuli presented to chondrocytes during perfusion can be calculated and correlated to metabolic response. Chondrocyte metabolism in three-dimensional alginate culture was dependent on the velocity of fluid rather than hydrostatic pressure or wall shear stress as previous monolayer studies have suggested. Additionally, this metabolic response was further modulated by chondrocyte attachment via integrins to the alginate substrate in a ligand density-dependent manner. This may indicate the involvement of focal adhesion complexes in mechanosensation of fluid flow. These findings indicate that the mechanism by which chondrocytes respond to fluid flow in vivo or in three-dimensional suspension culture is dependent on some combination of cell shape and surface attachment.