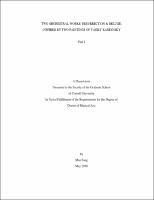 The title "Resurrection" is adapted from the subtitle of a painting by Vassily Kandinsky, "Composition V-Resurrection," which became the inspiration for the musical structure and expression of the piece. With the assistance of some computer analysis applications, I am able to draw closer the relationship of the structure of the painting with the pitch and time structure of the music. There are two continuous movements. The first utilizes mainly Western techniques, which are concentrated on the dialogues between the clarinet and the orchestra with an active and mostly dense orchestration; the second part is focused on the clarinet solo accompanied by various sounds that are blended with the electronics and the orchestra. This work was commissioned by the American Composers Orchestra and premiered by soloist Derek Bermel on the clarinet with ACO under the baton of George Manahan at Carnegie- Zankel Hall in New York City on February 20, 2009. Deluge adopted the title of Kandinsky's painting Composition VI-Deluge and was inspired by the color, form, and expression of the painting. According to Kandinsky, "in this picture one can see two centers: On the left, the delicate, rosy, somewhat blurred center, with weak, indefinite lines in the middle; on the right (somewhat higher than the left). The crude, red-blue, rather discordant area, with sharp, rather evil, strong, very precise lines. Between these two centers is a third (nearer to the left), which one only recognizes subsequently as being a center, but is, in the end, the principal center." The structure of the music is based on this form, where the third section of the piece serves as the main movement, transforming an ancient Gu Qin piece "Flowing Water" to be played by the harp. As the title Deluge suggests, it associates with water and disasters. This piece was commissioned by Esa-Pekka Salonen and Los Angeles Philharmonic Association..