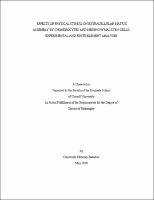 Using cells, materials, physical and/or chemical factors, tissue engineering (TE) is being researched extensively for the repair or regeneration of tissues and organs after damage/disease. With arthritis being the leading cause of disability in the United States, cartilage TE and associated techniques are actively being researched as potential solutions to halting the progression of the disease. This thesis investigated how physical stimuli used in cartilage TE affect the formation of functional TE cartilage. The lack of sufficient metrics available in the field for defining cell response is highlighted, which has hindered faster advancement of the field. The overall hypothesis of this work was that different levels of physical stimuli regulate the functionality of TE constructs and these levels differentially affect mesenchymal stem cells (MSCs). The first aim addressing this hypothesis established a baseline on the effects of cell density, type and species on engineered constructs. The second aim developed finite element (FE) models of scaffolds commonly used in cartilage TE undergoing dynamic compression, to quantify the physical stimuli present within them. Finally, the third and fourth aims investigated the effects of scaffold composition and physical stimuli on matrix metabolism by chondrocytes and differentiated MSCs, respectively. Chondrocytes and MSCs differed in their ability to metabolize matrix proteins. This difference was dependent on cell density, cell species and scaffold composition. For example, MSCs lacked the ability to retain and aggregate produced proteoglycan, and the absence of link protein may play a role. FE models showed that scaffolds generally used for cartilage TE yielded gradients of physical stimuli spanning orders of magnitude, for similar loading conditions. The consequence of such variations in physical stimuli was evident in cells seeded in lower weight percent scaffolds (i.e. less complaint and more permeable) producing more matrix proteins, but retaining the least amounts compared to higher weight percent constructs. These results highlight a limitation in the use of MSCs for cartilage TE; although MSCs are capable of matching the amounts of matrix produced by chondrocytes, they lack retention capabilities. The results also makes evident, the difficulty in comparing studies on the use of dynamic compression for the enhancement of cartilage TE constructs.