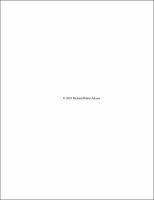 BIOGRAPHICAL SKETCH Richard was born in central Washington in the heart of apple country. His grandfather, Paul, started an apple nursery in 1964 which is now run by Richard's father and two uncles. Richard began working on the family farm at age 12 where he learned the important skill of budding. It was there that he developed a love for apple rootstocks. After he graduated from high school, Richard went to Brigham Young University to study agri-business management. He took a two year break to serve a mission for the Church of Jesus Christ of Latter-day Saints in Peru. Living among the Andean people only increased his love for agriculture. After completing two years of service, he resumed his studies at BYU and received his bachelor's of science degree. Richard continued working for his family nursery while he began studying at Cornell University. He was lucky enough to perform most of his master's thesis at his family nursery in Washington. Driving across the country with his wife and daughter twice a year from New York to Washington soon became a tradition and a welcomed adventure. After completion of his M.S. degree, Richard will return to the family nursery. iii