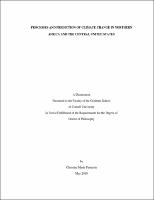 A method for simulating future climate that combines regional and global models is developed and applied to northern Africa and the central U.S. Simulation with the regional model allows for the optimization of parameterizations and landsurface model, and the horizontal resolution needed to resolve the strong meridional gradients of the Sahel and the West African and Great Plains (GPLLJ) low-level jets. The control and future simulations are not constrained with output directly from atmosphere-ocean general circulation models (AOGCMs). Instead, reanalysis products constrain the control simulations, and future boundary conditions are formed by adding anomalies in SSTs and lateral boundary conditions from AOGCMs forced with a business-as-usual emissions scenario to the reanalysis. This produces realistic control simulations by reducing model error in the boundary conditions. A nine-member ensemble of late-twenty-first century climate projections for northern Africa is generated using output from nine AOGCMs. The consistency of precipitation projections is much greater for the regional model ensembles than among the AOGCMs. Simulations with projected and idealized SST forcing suggest overall SST warming in part supports the ensemble agreement. Over West Africa, wetter conditions are projected in spring, but midsummer drought - related partly to weakened monsoon flow - develops during June and July, and heat stoke risk increases across the Sahel. Wetter conditions associated with enhanced moisture transport by the West African westerly jet, a strengthening of the jet itself, and moisture transport from the Mediterranean resume in late summer, and the likelihood of flooding increases. Over the Great Plains and Midwest precipitation projections for the midtwenty-first century are similar, with wetter conditions in the spring and drying in the summer. In April and May positive rainfall projections are supported by enhanced local daytime convection, while increased nocturnal rainfall during June in the northern Great Plains is associated with a stronger GPLLJ. Drying in the northern Great Plains is initiated in July by suppressed daytime convection and prolonged though September by positive land-atmosphere feedbacks. Near-surface air temperatures warm annually, with maximum warming over the Great Plains and Midwest of 4.4-5.1°F in August, and variability in summer daily maximum nearsurface air temperatures increases.