Examining Postwar Issues Of Male Identity Crisis And Disenfranchisment In Vietnamese Films: The Wild Reed And Living In Fear 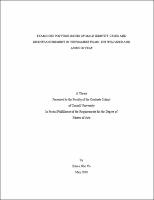 Themes of war and revolution dominated the Vietnamese film industry when it first developed during the early years of the First Indochina War (1945-54). These films glorified comradeship on the battlefield and venerated the image of heroic soldiers who sacrificed their lives and youth for the liberation and unification of the nation, which was achieved in 1975 after nearly a century of continued warfare. In the postwar period, the legacies of war continue to dominate the content of many films. Filmmakers have privileged the social plight of women as a key narrative tool to discuss the emotional wounds of war, and the trope of grieving Vietnamese women, particularly in the postwar context, has come to symbolize the sorrow and devastation of the nation in the aftermath of war. Yet, an examination of the crisis of Vietnamese male identity and the role of men in postwar society raise many interesting social and political questions about that society. The story of the postwar as told from the perspective of male protagonists in film sheds light on the mine-laden social and political landscapes through which the nation maneuvered to build a new and unified Vietnam. This thesis analyzes two films, Co Lau [The Wild Reed] (1993) and Song Trong So Hai [Living in fear] (2005), which revisit the theme of war from a nuanced angle through a critical examination of postwar issues from the perspective of male protagonists. The Wild Reed is narrated by Luc, a northern soldier from the Democratic Republic of Vietnam (DRV), and Living in Fear privileges the perspective of Tai, a former southern soldier from the Army Republic of Vietnam (ARVN). The films affirm that the crisis of male roles in the new Vietnam is intricately linked to conflicting social and political issues related to citizenship and nation building in postwar Vietnam. Films that privilege female subjectivity lack discussion of such issues. Both films analyzed in this thesis explore the fragmentation of the patriarchal family structure and its consequences on the male protagonists and their sense of masculinity in domestic and public spheres. The differing political stances of the protagonists affect the way in which their male crisis, as well as their recuperation, is experienced. I will also explore how Living in Fear, and to some extent The Wild Reed, dare to examine and articulate the social displacement of former southern soldiers in the postwar society. In doing so, the films depart from the conventional narrative of postwar Vietnam and offer an alternative narrative that illuminates postwar experiences that have long been heavily censored and suppressed by the state.