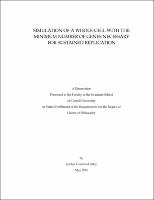 One important aim of synthetic biology is to develop a self-replicating biological system capable of performing useful tasks. A mathematical model of a synthetic organism would greatly enhance its value by providing a platform in which proposed modifications to the system could be rapidly prototyped and tested. Such a platform would allow the explicit connection of genomic sequence information to physiological predictions. As an initial step toward this aim, a Minimal Cell Model (MCM) has been formulated. The MCM is defined as a model of a hypothetical cell with the minimum number of genes necessary to grow and divide in an optimally supportive culture environment. It is chemically detailed in terms of genes and gene products, as well as physiologically complete in terms of bacterial cell processes like DNA replication and cell division. A mathematical framework originally developed for modeling Escherichia coli has been used to build the platform MCM. To lay the foundation for designing an MCM, sensitivity analysis and event detection methods applicable to the E. coli model are presented. An updated version of the E. coli model that links detailed genomic information about the location of dnaA genes and DnaA binding sites on the chromosome to physiological predictions has been developed. The model suggests that the concentration of DnaA binding boxes on the chromosome is critical to determining cell growth and behavior. This update is the first example of including detailed genomic information in a hybrid bacterial cell model, which was an important step toward the massive inclusion of new genes in the MCM. An MCM with 241 product-coding genes (those which produce protein or stable RNA products) is presented. This set is genomically complete and codes for all the functions that a minimal chemoheterotrophic bacterium would require for sustained growth and division. It is shown for the first time that it is possible to test the hypotheses behind a minimal gene set using a chemically detailed, dynamic, whole-cell modeling approach. It has been demonstrated that it is possible to simulate a whole-cell whose behavior depends on its (i) metabolic rates and chemical state, (ii) genome in terms of expression of various genes, (iii) environment both in terms of direct nutrient starvation and competitive inhibition leading to starvation, and (iv) genomic sequence in terms of the locations of genes on the chromosome. All of these behaviors are exhibited by a single-cell model that makes reasonable assumptions about cellular biochemistry, reaction rates, gene expression, and the effect of discrete physiological events on the cell's behavior.