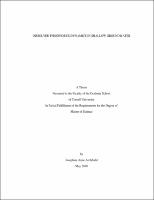 Dissolved phosphorus (P) reaching streams and lakes from agricultural areas is a persistent problem that impacts water quality and aquatic ecosystems downstream; one cause of this is a lack of understanding of how P is released from the soils of riparian and other hydrologically active areas. We monitored shallow groundwater and surface water for a year in three periodically water-saturated areas near an agricultural field in Cortland County, NY. P concentrations followed a seasonal pattern in all three sites, with organic P peaking in the summer, and inorganic P highest in the fall. The forested upland site had persistently higher concentrations of P, iron and dissolved organic carbon in its shallow groundwater than the two riparian sites also monitored in this study. The upland site also differed from the lowland sites in that it became saturated throughout the year after precipitation or snow melts, but drained relatively quickly. In contrast, the two riparian sites were seasonally saturated. This study suggests that position in landscape might be as important as land use in controlling P solubilization.