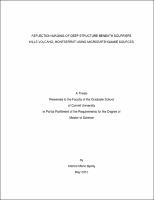 The SEA-CALIPSO experiment, carried out in December, 2007, was designed to image structure related to active volcanism beneath the island of Montserrat in the Caribbean. As part of that experiment, over 209 "Texan" recorders with 5 Hz geophones were deployed in 3 linear arrays at a nominal spacing of 100m, primarily to record signals from an airgun source towed offshore around the island. One goal of this controlled source experiment was to probe for magma and related structure using reflected phases from the airguns. However, the wide-angle geometries imposed by topography and bathymetry greatly limited the effectiveness of this approach. Fortunately, because the recorders were operating in continuous mode for three days, a number of shallow microearthquakes under the active summit of Soufriere Hills Volcano (SHV) were also recorded. Of the approximately 20 events that were recorded, only 7 had small enough error in the location to be used individually in our analysis and 14 had location errors small enough to be considered for stacking. Here we report results of processing those recordings as multichannel CMP (common midpoint) reflection sources, with emphasis on careful statics corrections and coherency enhancement. The data indicate the presence of subhorizontal reflectors at depths between 6 and 19km, which we interpret as sill complexes emplaced beneath SHV. The results of this analysis suggest that densely spaced (less than 100m) arrays recording natural events in volcanic regions are a viable and less expensive alternative to controlled source surveys, especially where access is severely restricted near active volcanic centers.