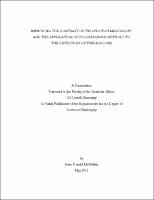 Multiphoton fluorescence microscopy (MPM) has proved itself a useful tool in the exploration of a vast variety of biological material. Recently, it has been demonstrated as capable of producing histological grade images from biopsied tissue, without the need for the intensive preparations characteristic of standard histology. Unfortunately, the intrinsic fluorescence of the tissue is quite dim, necessitating high laser intensity which produces both photo-bleaching and photo-damage. In order to increase the fluorescence detection in excess of the standard epi-collection, we have created a collar of light guides which surround the sample increasing the solid angle of collection. of objective lens specifically for MPM. Furthermore, in an effort to This objective possesses an maximize the available solid angle of collection, we have designed a new type extremely wide field of view, a sufficient numerical aperture, and, when numerically tested against the best current objective, collected more than an order of magnitude more fluorescence. In addition to improving the instrumentation, we have also attempted to increase the brightness of the biological tissue by using the endogenous fluorescence of a number of antitumor drugs. The two-photon absorption of these drugs was characterized. One of the measured drugs, Irinotecan, was used to image ovarian cancer allowing the acquisition of better quality images at much lower excitation energies than native fluorescence allowed. discrimination of the tumor tissue. Through the fluorescent imaging of another disease, tuberculosis, we will hopefully gain a better understanding of the illness which will lead to new types anti-tubercular drugs. To that end we have constructed a fluorescent bronchoscope that will be used to image tuberculosis bacteria which will have been selected to express a GFP variant on genes been demonstrated to be transcriptionally up-regulated in response to various environmental stresses such as low pH, hypoxia, and drug sensitivity. We have also examined the use of fluorescence lifetime imaging to identify the bacteria, and to image it against the bright background fluorescence of the pulmonary tract. Additionally, this drug demonstrated a preference for tumors relative to native tissue, aiding the