Beyond Recognition: Ethnology, Belonging, And The Refashioning Of The Ethnic Subject In Darjeeling, India 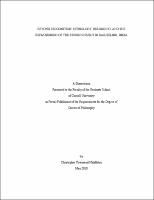 This dissertation examines how ethnological knowledge conditions the possibilities of rights, recognition, and belonging in the nation-state for the peoples of Darjeeling. Fueled by longstanding anxieties over their place in India, ethnic groups have increasingly turned to ethnology to reconstitute themselves as acknowledgeable communities. These techniques have proven instrumental to these groups" quests for recognition as Scheduled Tribes of India, and to broader efforts to bring ethnic-based sovereignty to Darjeeling as either a separate state or a "tribal area" as per the Indian constitution. The effects of these ethnological initiatives, however, extend well beyond recognition. In time, they have fundamentally reshaped the political, social, and subjective contours of "identity" itself. This dissertation accordingly focuses on the dynamics by which the people of Darjeeling have taken up-and taken on-normative ethnological forms to achieve their twinned objectives of ethnic revitalization and formal recognition from the Government of India. The research is based primarily on ethnographic and historiographic work conducted in India in 2006-7. Historically, it interrogates: (i) the (post)colonial pasts through which ethnology came to structure modern systems of recognition in India; and (ii) the local, affective histories of Darjeeling, which engendered these communities" desires for recognition. Ethnographically, the analysis angles into the present via a multi-tiered approach involving: (i) work with the ethnic associations and political outfits stewarding ethnic makeover in Darjeeling, (ii) a village-based study of the effects of these movements on everyday life, and (iii) an ethnography of the state anthropologists who were tasked with formally recognizing these groups. Through this design, the research ventures a critically historical and phenomenological understanding of the myriad subjects of ethnological knowledge today. Constituting a broader case study in "found" anthropology, then, these findings accordingly raise timely questions about the particular kinds of anthropological knowledge being circulated, produced, and practiced in the social world beyond the academy. Specifically, this research asks how ethnological knowledge continues to (re)structure the contemporary-in both Darjeeling and beyond-in new, if seemingly old, ways.