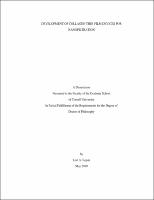 Recent advances in biomedical engineering have created a demand for largescale production of micro- and nanoscale devices for biological applications. In some applications, trace components of sub-nanoliter volumes of biological fluid mixtures must be identified, isolated, and analyzed. In others, a surface amenable to cell growth at specific positions is required. A porous, biocompatible coating, lithographically patternable by processes compatible with semiconductor processing, is desirable for both applications. Collagen thin films were investigated as a potential coating. To demonstrate biocompatibility, astrocytes were successfully cultured on collagen films on silicon nitride. Lithographic patternability was proven by generating 25 micron features via a novel direct liftoff technique. Unpatterned free standing collagen films, 50 nm thick and several square centimeters in area, were also created. For filtration applications, collagen films require a supporting substrate. Several materials were evaluated according to their ease of processing, microfluidic integrability, substrate permeability, and collagen adhesion to the surface while spanning holes in the substrate without tearing. Silicon nitride, polycarbonate (PC), polyethylene terephthalate (PET), and alumina all met the first two criteria. Alumina clearly outperformed the other substrates on the latter two criteria, and thus was selected for further characterizations. Several physical, chemical, and performance properties were evaluated of the collagen-on-alumina membranes at depositions ranging from one to nine layers. FTIR spectra consistent with the presence of collagen were qualitatively similar at all coverages. As coverage increased, SEM and AFM indicated a gradual change from mainly monomer to fibril-on-monomer film structures. Surface roughness was independent of coverage in monomeric films, and proportional to coverage in fibrillar films. The water contact angle decreased at higher coverages, likely due to increased roughness. Zeta potential decreased at increasing coverage, indicating a reduced positive surface charge, and lower likelihood of fouling. The transmembrane pure water flux and permeability were measured under typical industrial pressures. Collagen-on-sulfonated alumina films displayed good stability, and permeability inversely proportional to collagen coverage within a commercially useful ultrafiltration range. The measured flux and permeability could be explained in terms of the membrane structure. Collagen-on-alumina membranes are thus likely to prove suitable for biomolecular separations.