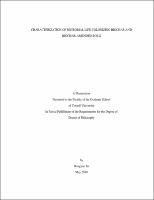 Soil microorganisms and their activities are critical for soil function, thus, understanding how biochar soil amendment may affect soil microbial life is critical for assuring that soil quality and the integrity of the soil subsystem are maintained. In this study, I characterized microbial life colonizing biochar and biochar-amended soils sampled from the Cornell Musgrave Farm, Aurora, NY, to study the effects of biochar soil amendment on microbial abundance; basal respiration; metabolic quotient (qCO2); carbon, nitrogen and phosphorus exoenzyme activities and locations; microbial community composition; and, the identity of the dominant fungi colonizing biochar. Microbial biomass carbon (MBC), measured by simultaneous chloroform fumigation extraction, was impaired by the adsorption of 47.5% more dissolved organic carbon (DOC) liberated from cells to 30 t ha-1 biochar-amended soils than to unamended control soils. Adjusted by use of the Freundlich model to correct for DOC adsorption, MBC increased by 18.5-37.5% with an increase in the biochar application rate from 12 to 30 t biochar ha-1. Meanwhile, high biochar-amended soils had lower basal respiration, which resulted in lower values for qCO2. These results indicate a possible increase in microbial carbon use efficiency and a decrease in C turnover in response to biochar addition. I found the 30 t ha-1 biochar-amended soils had 615.3% and 15.0% higher activities of alkaline phosphatase and aminopeptidase, but 81.3% and 82.2% lower activities of beta-D-glucosidase and beta-D-cellobiase, respectively, than those in the unamended control soils. This indicates a low demand for C substrate relative to cell needs for N or P in response to biochar addition. These results suggest that the changes observed qCO2 in biochar-amended soils may indeed be linked to increased microbial C use efficiency. We also localized the presence of active alkaline phosphatase and beta-D-glucuronidase particularly on biochar particles using EnzymeLabeled Fluorescence (ELF) and visualized bacterial cocci and bacilli and thread-like fungal hyphae either on or in the biochar porous structure using scanning electron microscopy. PCR-T-RFLP fingerprinting analyses revealed that both the bacterial and fungal community compositions were affected strongly by biochar addition and did respond differently to different biochar application rates and time since biochar was applied. Furthermore, sequenced fungal internal transcribed spacer (ITS) regions revealed a shift, from families of the Basidiomycota and Ascomycota, to families of the Zygomycota and Glomeromycota (arbuscular mycorrhizal fungi, AMF) in response to biochar addition, thus, I suggest that the adsorption of essential nutrients on biochar allows these fungi to colonize, produce exoenzymes and meet their mineral nutrient needs. The recalcitrance of biochar suggests that the septate fungi (mainly from families of the Basidiomycota and Ascomycota) may not be able to meet their carbon needs from biochar and thus are not encouraged to colonize. To conclude, our data suggest that profound changes in soil microbial communities are occurring in biochar amended soils that apparently lead to tighter cycling and reduced system loss of both nutrients and carbon. Biochar clearly influences the diversity of microbes colonizing its surfaces, their activities and their abundance, with a net result of the conservation of resources within the soil system.