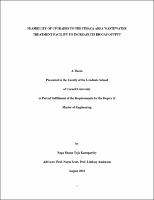 The Ithaca Area Wastewater Treatment Facility (IAWTF) treats sewage from the city of Ithaca, the town of Ithaca, and the town of Dryden. On an average, 13.1 million gallons of wastewater flow through the IAWTF each day. First, the wastewater is put through grates and settling tanks to remove larger waste particles. The water is then put through an activated sludge process where the organic waste fraction is partially converted to microorganism biomass under aerobic conditions. The biomass is removed via settling and the water is sent on for further treatment. The biomass sludge from the treatment process is thickened to lower the moisture content. From the thickeners, the biomass is pumped to the primary anaerobic digester where it is degraded for 26 days at a mesophilic temperature of 35˚C. Majority of the 566,000 m3/year of biogas is produced in the primary digester. Leftover sludge is pumped to a secondary digester where the material is further stabilized, converted into more biogas, and settled. Some sludge is circulated through a Fenton reaction tank, and then back to the primary digester. The rest of the sludge from the secondary digester exits the digestion process and is sent to a belt press system. Dewatering and preparation of the sludge for landfill disposal is performed using polymers and a belt press. The current biogas production of the facility covers about one-third of its heating and electricity needs. The objective of this project is an analysis of various options for increased co-production of energy at this facility and an assessment of the economics of each of the available options. Using food waste (FW) currently being diverted from landfills in Tompkins County (12,500 kg/day), the facility could produce enough energy to supply 46.7% of electricity needs and 51.3% of heating needs. This could be further improved to cover the entire needs of the facility and produce 97% excess electricity and 61% excess heat if the quantity of FW collected for treatment could be increased to the mesophilic digesters’ maximum calculated capacity of 115,000 kg/day. It is possible to further increase the energy output of the facility and produce 280% excess electricity and 106% excess heat by converting the digesters to operate at thermophilic levels (55˚C) and adding the corresponding maximum FW amount of 117,600 kg/day. Under these conditions, the net revenue for thermophilic operation exceeds that of mesophilic operation by around $6 million over 10 years. Under current waste collection scenario, the thermophilic conversion can cover 91% of the electricity needs and up to 76% of the heating needs of the facility, providing a net benefit of nearly $4 million over 10 years when compared to mesophilic operation. The analysis conducted here indicates that the thermophilic scenario was found to be more economical than the mesophilic one. However, for both scenarios, the cost of doing these upgrades exceed the benefits, which include energy savings and earnings from selling excess electricity/natural gas. For the thermophilic scenario to be profitable, either the electricity feed-in tariff should be at least $0.19/kWh, as opposed to $0.05/kWh today, or the facility should receive a tipping fee of at least $46.20/ton of FW collected. Currently the IAWTF does not have a biogas cleaning system in place, and this has resulted in failure of the existing reciprocating engines. To avoid such failures, biogas needs to be removed of impurities like hydrogen sulfide and siloxanes, which form deposits on engine surfaces, and water vapor, which is corrosive to engine surfaces. H2S will be removed using the LO-CAT® process, siloxanes with activated carbon, and water vapor using a dryer which condenses the water vapor by cooling the biogas. If biogas is to be upgraded to natural gas quality, CO2 must be removed using water scrubbing. In addition to conversion of the digester operating point, other proposed ideas for the IAWTF include minimizing the heat demand of the IAWTF by recycling heat between influent and effluent wastewater using the Walker Process tube-in-tube heat exchangers, adding a pretreatment apparatus for FW, and replacing the mixing system in the primary digester with Vaughn Rotamix. In addition, it is recommended that the old reciprocating engines at the facility be replaced with new ones of higher efficiency and capacity. Reciprocating engines are preferred for CHP generation as opposed to other available technologies such as gas turbines and microturbines. This is because of their lower costs and higher efficiency for the range of power generation capacities possible at the IAWTF (200-1536 kW). It is also recommended that the Fenton reagent treatment of sewage sludge, which is already being done at the IAWTF, not be discontinued because it improves volatile solids removal and biogas output. If excess methane can be generated, one of the possibilities is to use all the biogas for electricity generation and the excess electricity to charge plug-in hybrid electric vehicles (PHEVs) and electric cars. The advantage of doing this is the savings due to non-requirement of CO2 removal if biogas is used for generating electricity as opposed to upgrading it to natural gas. Also there is much investment in developing electric car infrastructure in the United States. However, fast charging techniques have not been commercialized yet, and will not be available for a few years. Ideas were also developed for use of waste products from the IAWTF. These include sending the flue gas from the co-generators to a greenhouse for CO2 supplementation and using the digested dewatered sludge for growing plants using hydroponics. However, the hydroponics method is disadvantageous because of pathogens and toxic compounds in sludge, which can cause diseases in plants. Waste products from biogas cleaning such as sulfur and siloxanes can be sold as raw materials to industry.