A biography of and interview with Patricia Thomson Herr 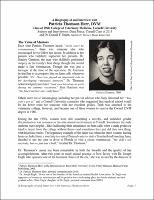 A biography of and interview with Patricia Thomson Herr  [PDF]   (317.2Kb)

Patricia Thomson is one of three women who graduated in Cornell’s veterinary class of 1960. Originally from Schenectady, N.Y., Trish entered Cornell’s agriculture program as a pre-veterinary student in fall 1954 and matriculated in the veterinary program two years later. Dr. Thomson’s first job after graduation was with Dr. Joseph Engle ’26 in Summit, New Jersey. Engle was a leading small animal veterinarian of the time and a founder of the American Animal Hospital Association. Dr. Thomson returned to Cornell in 1962 and served for one year as small animal interne. She married Dr. Donald Herr ’63, and they eventually moved to Lancaster, Pennsylvania, where they built and operated the Manheim Pike Veterinary Hospital. Dr. Thomson became the first woman president of the Pennsylvania Veterinary Medical Association. She has been active on various Cornell University activities and is an avid decorative arts historian and author.