A biography of and interview with Carolyn Foster Comans 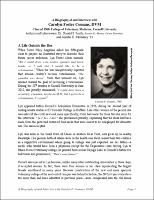 A biography of and interview with Carolyn Foster Comans  [PDF]   (317.0Kb)

A native of Western New York, Carolyn (Lyn) Foster Comans was a member of the last class that matriculated in Cornell’s old James Law Hall and associated veterinary buildings on central campus. In their second year (1957), the students moved into spacious new facilities on the east end of campus that are still an important part of the veterinary complex. Despite the gender discrimination that was common in that era, Lyn had good rapport with her male classmates and most of the faculty. After graduating in 1960, she worked in a small animal clinic in Buffalo, N.Y. She met and married Dr. Edmond Comans ’59 the following year, and they moved to Long Island and built the St. James Animal Hospital. Dr. Comans developed a strong clinical interest in pet avian practice, and later, acupuncture. Since selling the practice and moving to central Florida in 2001, she continues to run a part-time acupuncture practice. Throughout much of her career, she has been an active Cornell supporter, contributing generously with her time, leadership abilities and resources.