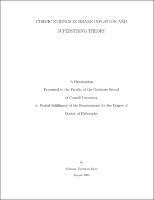 Observable predictions of Superstring theories are rare and important. Recent theoretical advances and upcoming experimental measurements of cosmological physics make the testing of generic predictions of string theories possible. Brane anti-brane models of inflation within superstring theory are promising as string theory descriptions of the physics of the early universe, and while varied in their construction, they can have the generic and observable consequence that cosmic strings will be abundant in the early universe. This leads to possible detectable effects in the cosmic microwave background, gravitational wave physics, gravitational lensing and pulsar timing. The string theory physics involved in the production of these defects at the phase transition at the end of inflation is reviewed herein. Detailed calculations of cosmic string interactions within string theory are also presented, in order to distinguish these cosmic strings from those in more conventional theories. It is found that cosmic strings are stable and have tensions compatible with current upper bounds and which are detectable in upcoming experiments. Interaction probabilities of these strings are found to be very different from conventional strings, providing the possibility of experimental tests of string theory.