Anatomy, Industry, and the English Canzonet (1770-1820): Placing Women in the Private Sphere 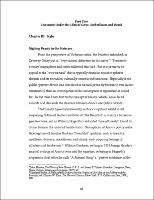 In late 18th-century England, scientists and artists alike sought doctrines that would elaborate a set of "fundamental" feminine attributes justifying women's restriction to the private sphere. Through musical analysis and readings of contemporary literary and popular-print culture, this dissertation shows how the English canzonet (a genre of domestic song known today primarily through Haydn's two sets, but which was then widespread and popular) reflected medical and industrial discourses about gender, and through these "public sphere" discourses, helped to fix women within the private sphere. Part One describes the social circles in which cross-fertilization of musical and scientific-industrial ideas took place. There, canzonets were understood not only to hold domesticating properties, but to communicate "authentic" sentiments, making them ideal vehicles for the expression of the "truth" about women. Part Two examines intersections between canzonets and the newly-mobilizing discipline of anatomy, describing a fascination with "beautiful death" and "uncertain death" as common interests between the two cultural realms. These conceptions of death combined to assert an ostensibly elevated status for women but concomitantly defined them in terms of committed love that survived even the end of life. In this context, sighs, both textual and musical, drew attention to women's bodies, opposing them to reason and tying them to domesticity. Part Three considers canzonets in light of tensions between industrial and pre-industrial conceptions of time. The linkage in song between women and time, when time itself was taking on features of commodification, resulted in an endlessly reiterated performance of women's reification as an object of consumption, an apt maneuver for the "marriage market" setting of the drawing room. In sung nostalgia for "old" time, meanwhile, women were apparently empowered to resist the incessant forward motion of mercantile time and the perpetual demand for originality characteristic of the industrial age. And yet, the fact that this notion of time was nostalgic and old-fashioned signaled women's disenfranchisement from a progress-centered, public-sphere orientation. Part Four chronicles and explores the significance of the genre's migration to the realms of masculine, virtuoso display and devout church music. The Appendix provides a checklist of canzonets held in the British Library.