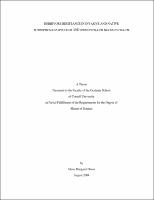 Invasive plant species are increasing worldwide and often have significant impacts on local ecosystems. Many attempts have been made to use augmented herbivore populations as a biological control of nuisance populations, however, the success of these efforts has been variable. One character which can affect the success of these biological controls is the expression of plant herbivore resistance. In this study I examined inducible and constitutive herbivore resistance in native and invasive samples of the aquatic angiosperms, Myriophyllum spicatum and Myriophyllum heterophyllum. M. spicatum is native in Europe, Asia and north Africa and invasive in much of North America. When fed on by the ecologically significant herbivore, Acentria ephemerella, M. spicatum plant tips changed from green to red with a simultaneous structural change from closed upward pointing leaves to open drooping leaves. A similar response was observed in this study when native and invasive M. spicatum plant tips were exposed to jasmonic acid, a plant hormone known to stimulate the expression of plant defensive genes. A. ephemerella fed plant tips exposed to jasmonic acid had reduced growth compared to individuals fed unexposed plant tips indicating the induction of herbivore resistance. Not all of the herbivore resistant traits we examined, however, were induced by jasmonic acid. Total phenolics and tellimagrandin II concentrations were not affected by jasmonic acid and changes in nitrogen concentrations were inconsistent. Tissue reddening, in part caused by decreased chlorophyll and increased anthocyanin concentrations, was consistently induced and may affect the visibility of herbivores in the field. However, this trait can not explain the reduced herbivore growth so it is likely that other herbivore-resistant traits, not examined in this study, were induced in M. spicatum. M. heterophyllum is native to North America (except New England) and has invaded many New England and European lake ecosystems. When exposed to jasmonic acid in this study, concentrations of total phenolics, and an unknown phenolic compound were increased and nitrogen concentrations were decreased. These induced plant tips reduced the growth of feeding A. ephemerella. This response, however, was only observed in German (invasive) M. heterophyllum and not in samples from Maine (invasive) or New York (native). The constitutive expression of traits presumed to confer herbivore resistance was also significantly different among invasive and native populations. Maine had significantly higher concentrations of total phenolics and the unknown phenolic was only present in German M. heterophyllum. These differences in constitutive and inducible herbivore resistance among native and invasive M. heterophyllum populations may be a result of rapid evolution of invasive populations or their hybridization with native Myriophyllum species. The constitutive and inducible herbivore resistance of M. spicatum and M. heterophyllum shown in this study would have a negative impact on biological control species which has not previously been considered by lake managers. Furthermore, differences in the expression of herbivore resistance among invasive and native populations of M. heterophyllum may partially explain the variable success of this invasive species.